With what Overdrive can only explain as being one of the best releases from 2012, Kvelertak are back to prove that they are not just one trick ponies. “Meir” is the Norwegians second offering and with an opening track “ápenbaring” literally creeping out of the speakers, this has to be the most anticipated build up to a recording opener in recent memory lasting just short of 2 minutes before the launch into orbit. Once things get underway, it become quite clear that Kvelertack are not fucking around and get straight down to business. 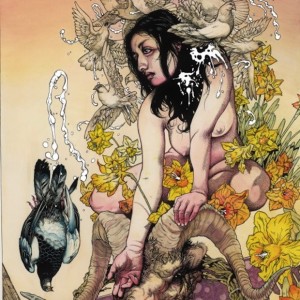 What we get is a wonderful concoction of Hard Rock, Metal, Punk and Death all cooking together on high heat and unbelievably, working along side each other to produce what Overdrive can only describe as being a totally unique and truly individual sound.

Tracks such as “nekrokosmos” and “tordenbrak” have the swagger and bitter emotions of a fresh bar fight. Erlend Hjelvik’s raspy metal as hell vocals throughout is strangely melodic yet demonic and has a hint of hardcore about it. These elements  just marry the genre styles perfectly together and are all stuffed with rolling riffs that would not be a million miles away from a Motorhead, AC/DC or Thin Lizzy lick or two .

It’s staggering to comprehend the complexity and layered texture of music styles contained within “Meir”, however the delivery is effortless and highly contagious, offering this listener a head scratch as to why this mix of  genres has not been executed with the finesse and quality achieved by Kvelertak? The answer is simple really, Kvelertak are specialists in creating awesomeness and there are not many, if no other bands that have the balls and talent to do what they do. FACT! .

Kvelertack seemed to have appeared from no-where and are now going all the way to everywhere, fast! Album number two is as strong as their fabulous furious debut and with a touring schedule that will no doubt be as intense as their commitment to breaking down boundaries, 2013 looks like it will be the year that Kvlertack will be on the lips of most of the globe Metal community, and rightfully so. Meir is simply a fantastic album that is unpredictable, loaded with twists and turns, packed to to the gills with catchy riffs, gang vocal choruses, and unfathomable awesomeness. A definite contender for album of the year.

“Meir” will be released on Friday 22nd March on this link Kvelertak Music and will be available from all good records stores. 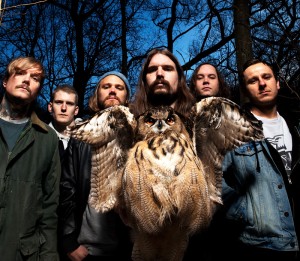