Gainesville, Florida natives and ska/punk/pop pioneers Less Than Jake will play alongside Southern Californian favourites, Reel Big Fish, this winter for a co-headline tour in the UK and Ireland, including two dates at the Button Factory, Dublin. 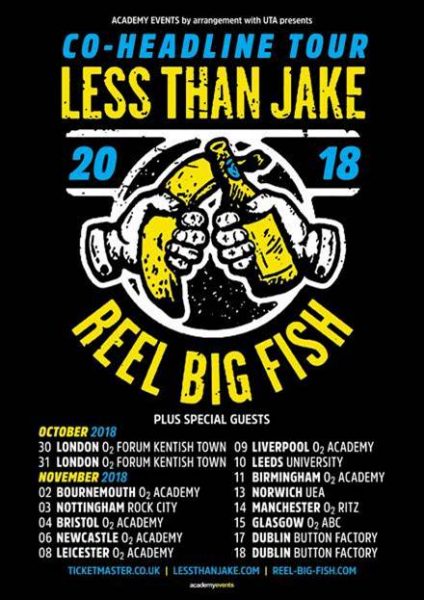 It’s been four years since the two bands have come together for a headline tour and anyone who has witnessed either of them on stage before will know that their live show is powerful and energetic, but most of all an epic party; where do we sign up?!

With over quarter of a century behind them and no signs of slowing down anytime soon, Less Than Jake are as much a musical revelation now as they’ve always been.

A relentless touring and recording output has seen the quintet release eight studio albums, countless EPs and compilations and live records from legendary sets including Live From Astoria (2016) via Rude Records. Continuing to play live for over 150 dates a year keeps Less Than Jake fresher than ever and an unmissable live force.

Since celebrating their 25th anniversary in 2016, Reel Big Fish have released eight studio albums with their most recent release Candy Coated Fury in 2012, an inspired and infectiously catchy return to the hyperkinetic ska and biting wit of the band’s beloved early albums. Still fronted by original lead singer and songwriter Aaron Barrett, their relentless touring schedule sees Reel Big Fish play over 250 shows a year to thousands of loyal fans all over the world!

With special guests still be announced, get ready for a night of favourites, catalogue classics and all-around mayhem.

Tickets are on sale for Less Than Jake and Reel Big Fish in Dublin’s Button Factory Saturday 17th/Sunday 18th November are priced €33.50 and go on sale Wednesday 13th June at 10 am through www.ticketmaster.ie & usual outlets nationwide.