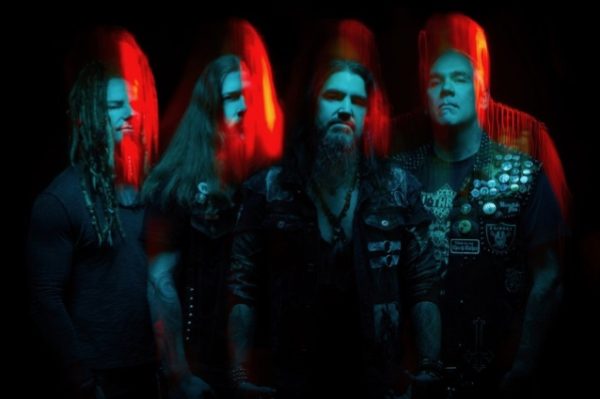 Hell has officially frozen over!!  It is with great excitement that MACHINE HEAD announce the first leg of their 25th Anniversary tour for the band’s classic debut, ‘Burn My Eyes’.

The dates kick off in Germany on October 5th in Freiburg, continue across Europe and the UK, wrapping in Dublin, Ireland on 8th November.

The US leg will be announced in due course for November into December as the tour makes its way around the globe. 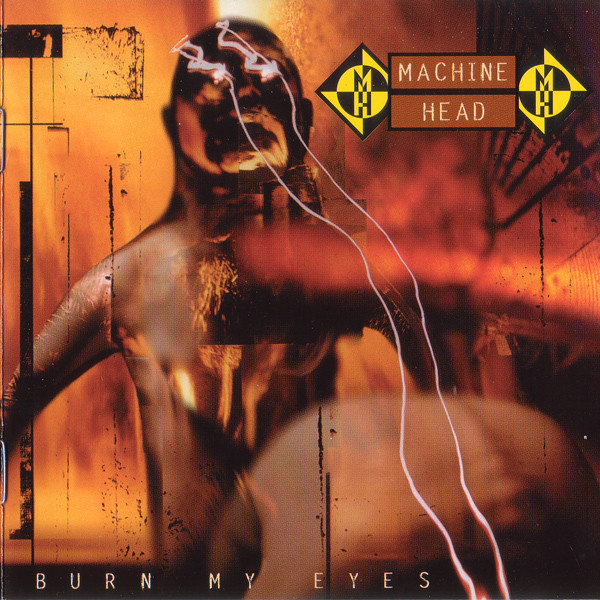 Continuing with their wildly popular ‘An Evening With…’ format, these not-to-be-missed shows will be a three-hour musical extravaganza, comprising two parts.  The first section will feature a battery of MACHINE HEAD’s modern classics, such as ‘Imperium’, ‘Halo’ and ‘The Blood, The Sweat, The Tears’, featuring frontman/guitarist Robb Flynn and bassist Jared MacEachearn performing alongside two yet-to-be-announced musicians on guitar and drums.

The latter part of the set will feature the Bay Area band’s classic debut album, ‘Burn My Eyes’ played in its entirety for the first time ever.

But that’s not all! Taking the stage for this part of the set will be ‘Burn My Eyes’-era alumni and MACHINE HEAD’s original drummer Chris Kontos and original guitarist, Logan Mader.

Band founder and visionary, Robb Flynn tells us “Having started rehearsals with Chris and Logan several weeks ago, I’m literally giddy with excitement at the prospect of how much fun this is going to be.

Both Logan and Chris are in phenomenal playing shape, the vibe between all four of us has been incredibly positive, and having run through deep cuts like ‘Death Church’ and ‘I’m Your God Now’ for the first time in over a decade, has reminded me of how fucking heavy our older songs are!

This tour is going to be MASSIVE!! Do not sleep on this, tell your friends, spread the word, because tickets are going to disappear!”

Logan Mader adds, “It’s a huge honor for me to take part in celebrating ‘Burn My Eyes’ 25th birthday!  It’s hard to believe this is actually happening. I feel like I won the guitar player lottery…. again.  The fact that BME is still relevant today has a lot to do with the fact that Robb has kept the band alive and strong for two and a half decades.  I’m very grateful for this!”

Chris Kontos echoes the sentiment, stating “This is an absolute mind blower!  Playing these songs again after 23 years feels just amazing. The fact that it’s 25 years later and the BME record is still relevant and revered is humbling, to say the least.

Doing a huge world tour in celebration of the record is a great way to acknowledge the legacy of MACHINE HEAD’s past and future.  I’m so looking forward to sharing these songs with the MACHINE HEAD fans around the world. Can’t wait to meet all you ‘Head Cases’ out there!  You can be sure it is going to be a crushing night! See ya soon!”

MACHINE HEAD’s Lord of the low end, bassist Jared MacEachearn is equally looking forward to the run, saying “It’s not every day that you get to pay tribute to a classic like ‘Burn My Eyes’ and with Logan and Chris in the mix, I’m really excited to bring something special to old and new fans alike.”

Check out the excitement in this video clip from rehearsals;

Tickets go on general sale 10 am local time, Friday 29th March, with Live Nation’s pre-sale going live at 10 am, Thursday 28th over at this link and Ticketmaster for Belfast & Dublin.

Once tickets are on sale, 40 VIP bundles per show will be available as follows. Click here for purchase details on the below packages: 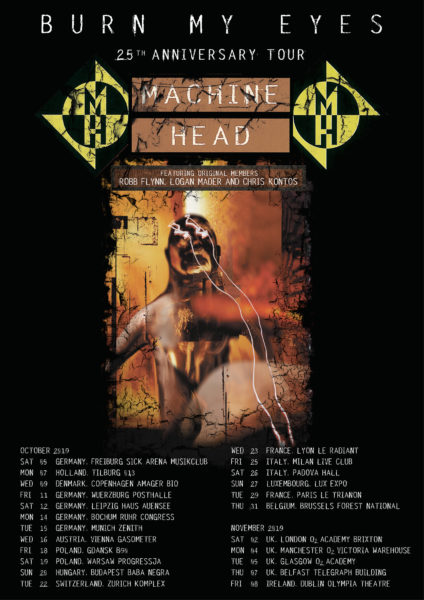