Overdrive catches up with GANGS on the eve of their Academy shows!


The future of Irish rock music is in very safe hands as Overdrive caught up with GANGS to talk all things retro and what to expect from their show in Dublin’s Academy on September 27th! 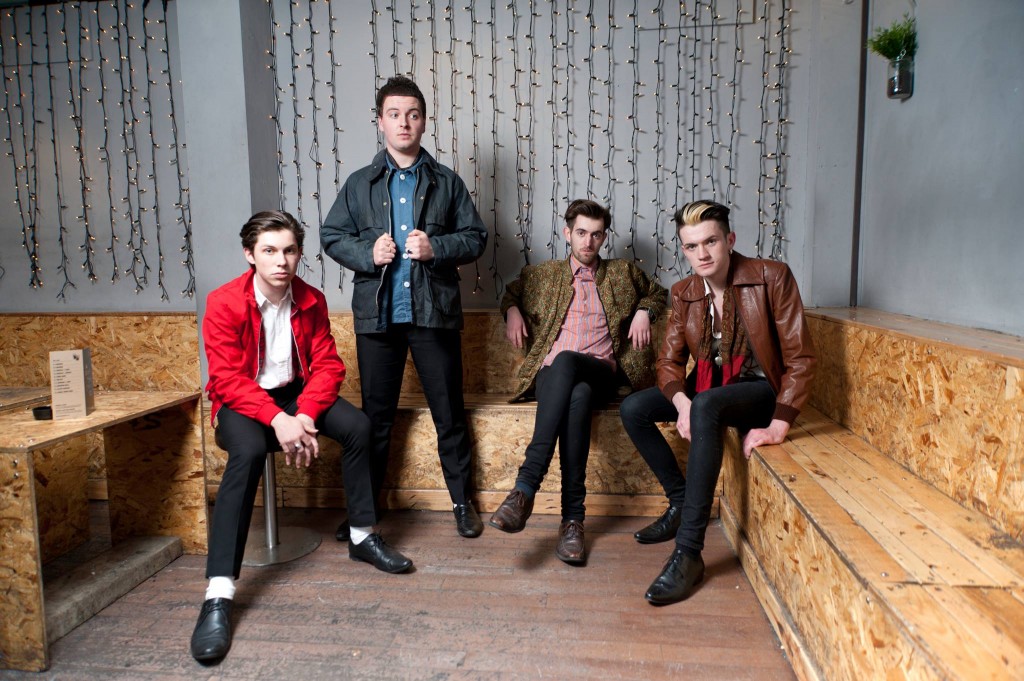 OD: Can you give me a quick background as to how you all got together?

Jordan: Well we all mates when we were kids and started playing music together. I met Jonny in school, he was already friends with James and had been playing music with him. Two years ago we decided to take it seriously and putting some songs together. We grew up close to each other but it was music which made us friends, music and clothes.

OD: Why did you choose the name “Gangs” and did you have any other names in the bag before you stuck with this one?

Jordan: We wanted to bring back the gang ethic in bands, you know what I mean. We were a gang of best mates and all the bands that we loved, the Specials, the Roses and the Beatles and all were proper gangs and we wanted to emulate that.

We never really had any other names. There were days when we tried to name the band and we had some bad names but then Gangs just fitted.

OD: Your debut EP is currently being recorded Reekus Records, can you talk a little about the current status of the recording and when can we expect to see it available?

Jordan: It is completely finished now. We were recording with Brian Foley, who did the Blades, and we have just done the artwork. Done and dusted now. We just brought out the video for Daisy. The release date is the 20th of September and there is a launch gig in the Academy on the 27th.

Daisy the track was recorded in one take, the first take. We just went in and recorded it live, kind of old school.

OD: Do you have a title for the EP as yet or is it a work in progress?

Jordan: It is called ‘Back to School’. It is kind of back to basics with two guitars, bass and drums.

OD: Are there any ideas to release a small run on vinyl with the EP?

Jordan: Yes we are going to release on vinyl maybe 12’. It should be in HMV the day before the launch where we are doing an instore gig.

OD: You have played some shows over in England recently and have had the pleaseure of paying The Great Escape festival over in Brighton, can you talk a little about how this came about and do you find that you are being well received in the UK?

Jordan: Yeah we have been well recieved. Our music seems to be more geared towards the UK as we are more influenced by English band. It is nice to have an audience that is really listening to you and understand what you talk about.

OD: You have a very distinct sound that comes from I would believe, such iconic bands as The Jam, The Animals, and The Kinks etc why does this particular genre of music resonate with you and do you feel that most bands today are loosing the real art of song writing?

Jordan: Yeah a little bit. That kind of music is the best kind. The Kinks tell a story in a song and I like that. People can relate to the music in everyday life.

OD: Your style is most definatly something that stands out and works very well with the “Gangs” overall sound, do you feel that the image of the band and the overall presentation of “Gangs” is just as important as the music itself?

OD: Since the creation of the band, can you talk a little about how you made the journey from starting out and playing in the rehearsal space to getting interest in festivals in the UK and of course Electric Picnic this weekend?

Jordan: A goal for us was to get over to London and we were always told that it was a waste of time, your not good enough yet, but the first time we were over there we played to a really good crowd and got an encore and all. It was a great reception and it was great to get to that stage. Electric Pinic also has to be a highlight tomorrow.

OD: There are currently no A& R repreresentives in Ireland working for the major labels, so what kind of advice would you have for bands looking to break out and reach a bigger market like The Strypes and Wounds?

Jordan: Bands who do it seem to work really hard. We jam five/six nights a week. We need to have your own world, to be different to catch people’s attention.

Another thing is when we started playing gigs they were really bad but people were giving us advice like ‘even if you are playing a gig to two people, give it your all, you never know who might be there.’ We took that on board and even with bad gigs.

And get a manager. That is a good help haha.

OD: Gangs are scheduled to play two shows in one day in The Academy on September 27th, have you ever played two show’s in one day before and what can we expect from a “Gangs’s” live show?

Jordan: No, we are really excited to see what happens there.

With our music, we write it to be experienced live and just bursting with energy. We feed off each others energy and the crowds. We give the crowd a lot of time, we care more about the crowd than they do us. They are more important than us in the bands eyes.

OD: Are there any plans for a more extensive UK tour or possible dates in America in the near future?

Jordan: Not really with America, we are not really fans of flying but we are going to the UK on the 10th September to play the ‘Black Heart’ in Camden. And loads more planned.

OD: Will there be a debut album coming out soon?

Jordan: Maybe not an album. In November or December we are going to do another EP. We are writing for that now. We had said that we would not record an album until we got signed onto a major label so we are going to stick to that.