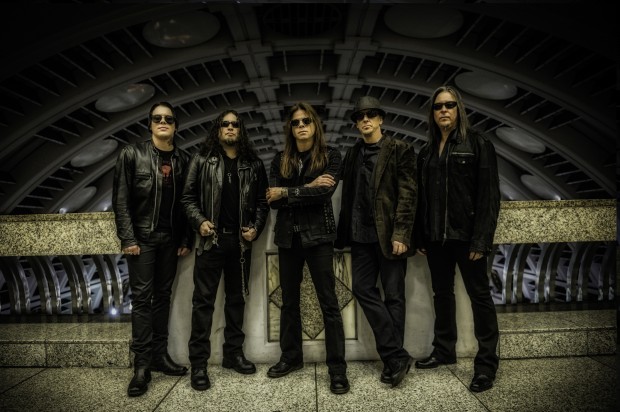 With the anticipated arrival of QUEENSRŸCHE’s  Dublin show in October the band are putting the rather public turbulent past behind them and focusing on life on the road with out ex front man Geoff Tate. Overdrive can report on a recent interview between the bands drummer Scott Rockenfield with Full Throttle Rock . Some of the interview can be seen below:

Full Throttle Rock: Some of your previous albums in recent years have been a little hit-or-miss with some quarters of your fanbase and the media. This [new self-titled] record has been seen by many fans and critics as a return to form for the band. Was there a conscience effort to get back to basics on this album or was this just the natural progression of how the album turned out?

Scott: Well, you know, that is a great question, too, because you kind of hit it, I think, right on the mark with what you just commented on. What kind of happened that made this record so special, actually, started a year ago. So when we got Todd [La Torre, vocals] in the band and we were just working on our live show, right when he joined with us, we wanted to go out and play music together, and that is kind of the short story to it all. But that is really how it happened. We got to know Todd in a short amount of time and we wanted to play some music together. So we learned all these great songs from our past catalogue, all this stuff we had not played in a long time, like “Queen Of The Reich”, one of the first songs we ever did that our fans love, that is one of the songs we play in the show, and we have been playing. You know, we play a lot of great stuff off “The Warning” record that we have not done in thirty years, that type of stuff. So in doing that and playing those songs, we got to remember what it was like to make that material, why we were so excited back then, why our chemistry was so darn cool and we had such a great time. And I think just playing all those songs for the last year, just being a part of that while we were making the new songs, I think it injected that energy and that vibe into the new songs. And we kind of feel that we brought QUEENSRŸCHE back to some of those eras that, I think, our fans as well, really want from us and maybe that is why everybody feels so great about the record because they feel like there is a part of our history in this new record.

Full Throttle Rock: For three decades, [singer] Geoff Tate was a major part of QUEENSRŸCHE and all that you have achieved. With the bitter way he left the band, how do you look upon those years with him? Is his time in the band tarnished now forever? Do you look at those years with pride or are you just looking forward?

Scott: Well, there are a few answers I can give within that. First and foremost, [I am] definitely looking forward. All of us are really focused on what we have done recently, and then what it means for us moving forward, which is a great tour we are going to see around the world to support the new record. We are already working on new music together now, so that is our fun. And part of the history of everything we have gone through for the last thirty years, like you were saying, it is obvious. For me, I look at everything I have gone through as part of who I am and why I was meant to be a part of it. Everybody has good stuff and everybody has bad stuff, and you have a little bit of something in between and it is kind of just a part of life, and I learn from all my good dealings and from the mistakes that I have made or that I have been involved with and I move on. But I think that is where my strength lays, and I think that is where the strength of my future lays as well. You know, we moved on and we feel really good that QUEENSRŸCHE is doing what it is supposed to be doing, and that also gives us a huge light that we follow every day because it just feels so strong to us right now. Listen, we wish Geoff well — I hope he finds what he wants to do and it makes him happy and he is able to focus on that for him. And for us, we have to focus on what we are doing and just keep doing it. Because the fans are smiling and giving us such great feedback and it is hard not to just focus on that. [laughs]

Full Throttle Rock: Several weeks ago I spoke to Geoff and I asked him to comment on reports and allegations of some wild behaviour before he left the band, such as spiting on you during shows, abusing the audience and so on. He didn’t make too much of a comment. What views, if any, do you have?

Scott: Well, you know, I mean, all those issues, most of those are fact that you stated there. There are a bunch of incidents that have transpired over the last year and a half, and most of those led up to the final reason why we wanted to move on and we just realized that we were not working together anymore. Michael [Wilton, guitar], Eddie [Jackson, bass] and I, we have been struggling with this for a few years and it has been kind of an ongoing struggle that was just getting worse, and last year was when it got to the final boiling point where we just looked at each other and said, “We just have to move on and have fun.” And we were not having fun anymore. At that time, it was becoming not what we wanted to do anymore. We knew we would find fun again if we moved on, and that is our goal, and we did. People chose to react the way they reacted, I guess, when I’m being humble, and we chose to take the positive and make good music and letting the music speak for what we do. And that is our goal and will continue to be our goal, to be honest.

Tickets for QUEENSRŸCHE are on sale now from www.ticketmaster.ie and Sound Cellar.

For more information on this show just hit this DME link. 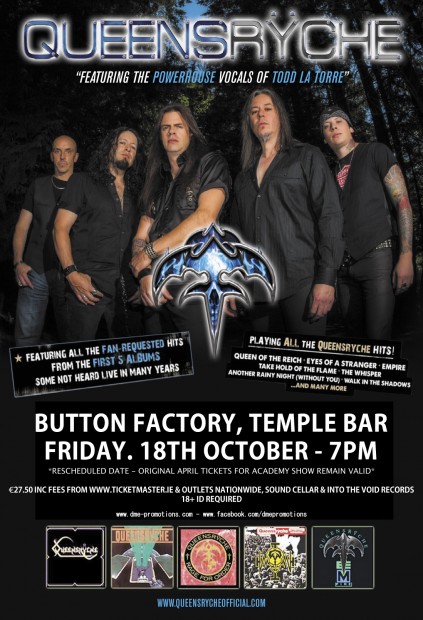