Alter Bridge return to Irish shores for their biggest show to date, with special guests, Halestorm, and Mammoth WVH…. 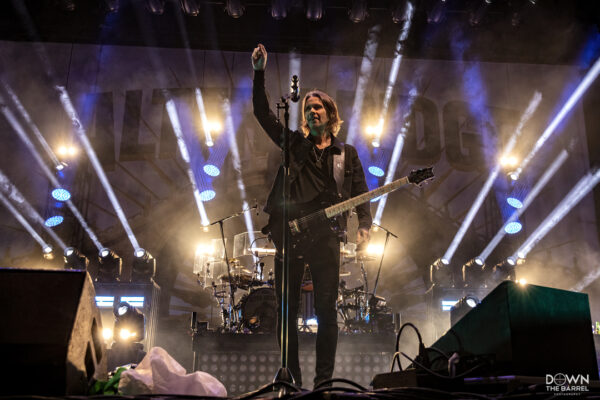 Taking on the biggest indoor venue in the Irish Capital, Alter Bridge roll into the 3Arena with guns blazing, with powerhouse guests, Halestorm and Mammoth WVH.

With plummeting temperatures gripping the Irish capital, fans still braved the icy conditions, and remained jubilant, despite the sharp winds that lashed the exterior of the 3Arena, as they knew they knew what was in store for them as soon as the venue doors were open.

With a giant “Mammoth” backdrop decorating the 3Arena stage, Wolfgang Van Halen took to the stage, with little fanfare, and proceeded to rip through the first song of his set before running into technical issues with his guitar rig. Not the best start, but honestly, no one is complaining as the issue is quickly rectified, and the show goes on without a hitch.

Considering Wolf is the son of the one and only Eddie Van Halen [RIP], there is no debating that he is an exceptionally talented individual. This being his first ever Irish show, we are treated to slices from his outstanding debut album. ‘Mammoth‘, ‘Mr Ed‘, ‘Epiphany‘, ‘Think It’s Over‘, come through crystal clear, emphasising his outstanding vocals, as well as the pristine backing vocals from bassist, Ronnie Ficarro, and guitarists, Ronnie Ficarro, and Jon Jourdan.

Mammoth WVH provide a stunning set of bangers that sound as close to the Summertime as one can possible get at this time of the year, and with each song, Wolf seems to relax a little more, and gives us ‘Distance‘, ‘You’re to Blame‘, and ‘Don’t Back Down‘, before bidden his farewells, and a flurry of stage crew scramble to prepare for Halestorm.

Our advice is pick up the debut album and bring a bit of Summer into the heart of winter. Awesome stuff.

Next up, and no strangers to an Irish stage, Halestorm come roaring out of the traps with opener, ‘The Steeple‘, and once again, front-lady, Lzzy Hale manages to stun the entire venue with her golden pipes! Is there a better touring rock vocalist that can match her? I’ll let you think about that for a while.

Having just passed through the EU and UK earlier this year with their ‘Evening With...’ show, tonight’s performance is very much an in your face immersive experience as they smash out ‘Wicked Ways’, ‘Love Bites’ (So Do I), ‘Psycho Crazy‘, before they take a breath, and it’s safe to say, at this point they had the entire venue in the palm of their hands.

With limited stage time, Halestorm waste no time in punching holes through the atmosphere with a slew of hits, allowing time for Arejay’s drum solo shtick, which, to be honest, I would rather be absent allowing more time for more of the bands back catalogue.

Finishing up with ‘Back From The Dead‘, ‘I Get Off‘, and ‘I Miss The Misery‘, it seems their set is over as soon as it began. Having seen Halestorm many times in the past, this was the first time I’d witnessed them NOT headlining so it seems strange to bid farewell to them so soon, but none the less, they delivered a strong set, and with thunderous applause echoing throughout the arena, it’s another job well done for the four-piece.

Now, to the main attraction. Alter Bridge have been steadily returning to Ireland over the last six years where they have proved to be a favourite with the Irish Rock community, so, given that this is their biggest headline show to date, expectations were high.

With a slightly stripped back production tonight, [no pyro or additional large screens], Myles Kennedy and Co take to the stage under a spectacular light show that illuminates all band members in different contrasts, as they rip through ‘Silver Tongue‘, with flawless ease.

Mark Tremonti stalks the lip of the stage as they launch into ‘Addicted to Pain‘ sounding as crystal clear as did both Halestorm and Mammoth [kudos to the sound crew].

‘Ghosts of Days Gone By‘ is as astounding as it is on record as Kennedy opens his lungs for all of the arena to hear as they respond with unified sing alongs, which the band clearly welcomes with wide-eyed smiles.

Taking us through some of the highlights of their rich legacy, AB liberate some gems such as ‘Slip To The Void‘, and even ‘Burn It Down‘, featuring Tremonti on vocals. Very much an arena-sized band, Alter Bridge spend the rest of the show dropping sonic bombs, from ‘Blackbird‘ to the title track of their latest opus, ‘Pawns and Kings‘, the absolute banger that is, ‘Isolation‘ before closing off with ‘Metalingus‘, and encore, ‘Open Your Eyes‘, and ‘Rise Today‘.

With another solid performance under their belts, the band bid their goodnights to the elated crowd, and, will no doubt, begin the process all over again, before they hit the stage in Manchester for their next show the following night.

If anything, tonights show displayed the inevitable, “passing of the torch” from the classic Rock & Metal Gods of our youth, to present day bands, is in good hands, with the likes of Alter Bridge, Halestorm, and Mammoth, who continue to write, record, tour and inspire the next generation.