We take a close look at the recent E.P. from Swiss Rockers DAXX & ROXANE. Get the full review below.

Although the latest E.P. from Swiss rockers, Daxx & Roxane (I really must find out where the name came from) has been out for a while now, it certainly deserves taking a look at.What’s on offer here is four tracks of high octane, sleaze induced rock ‘n’ roll madness, with some unusual elements thrown into the mix, with a little bit of a country vibe with the addition of some nice harmonica on the opening track “Sugar Rush” which is essentially a throw back to the late 80’s early 90’s, a sleazy rock piece with a nice sound and what would appear to be a cracking attitude.

Track number two, “Wrong Side” reminds me in places of both Spread Eagle and even The Georgia Satellites, it’s actually quite difficult to pin them down to a particular sound, for a first release there’s a really cool mix of influences which all get thrown in the blender and don’t seem to make this one a confusing hot pot, if anything it all goes to make the sound on this EP very different and add these guys to the watch list. This track is probably the Hard Rockin’ highlight of the EP, and it has that great feel good factor to it, old school but not dated. 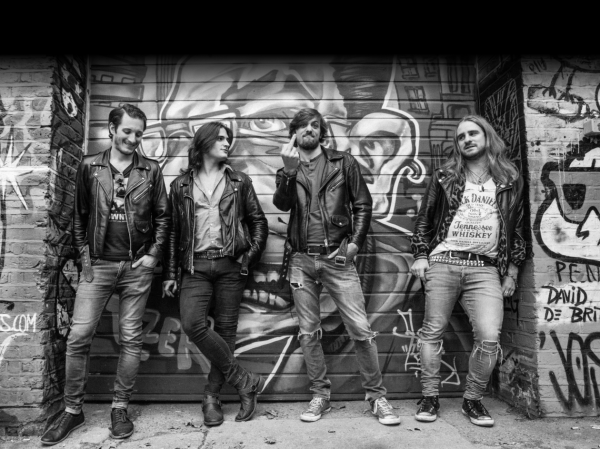 Next up is “Girl Next Door” is in the same rocking mode as everything else but certainly has more of a 70’s sound about it, which is pretty cool and works really well with Cédric’s vocals, which are excellent throughout with plenty of grit and gravel and finally the closer “Too Hot To Love” which is a balls out rocker, with screaming solos and some nice twin guitar harmonies, with maybe even a touch of Thin Lizzy in there for good measure. This may only be a four track E.P, but there’s plenty in there to give you an idea of this bands potential.

The band themselves are a four piece composed of Cédric (Bass/Vocals), Cal & Simon (Guitars) and Luca (Drums). 4×4 is a really enjoyable and fun listen in a genre that is far from saturated, more please, will definitely be looking to have a listen to their debut album when it makes an appearance and will hopefully get to see them, but that will probably have to be on a Festival bill. Give this one a spin and see what you think, it’s definitely a promising start from a band that was new to me. 3.5/5

Too Hot For Love

For more information on DAXX & ROXANE, select this link.