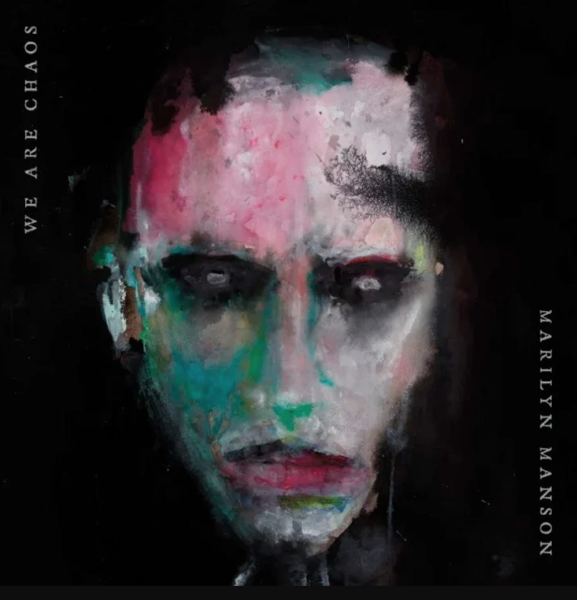 Always a controversial character, both artistically and individually, Marily Manson continues to provoke, poke and scrutinize pop-culture and the slow-rotting discourse of 21st-century America.

His latest opus, “We Are Chaos” sees the elusive frontman team-up with producer/musician/songwriter, Shooter Jennings for a continued journey into his slow metamorphosis from the God of Fuck to a somewhat mishmash type of Ziggy Stardust/Nick Cave/Lou Reed hybrid.

With the lead single [released in late July] also being the title track of the album, “We Are Chaos” gives a firm signal of Manson’s ‘Bowie’ influence/obsession. The album, as a whole, seems to be more of a pedestal for Manson’s poetry, rather than the music.

Don’t get me wrong, “We Are Chaos‘ packs the odd punch here and there [‘Red Black and Blue‘, ‘Don’t Chase the Dead‘, ‘Perfume‘, ‘Infinite Darkness’, ‘Keep My Head Together’], but seems to retreat into the tall grass to remind the listener that the shedding of Manson’s former skin is still very much in a state of transition, with said transformation; not quite complete as of yet.

Where 2017’s ‘Heaven Upside Down‘ was more a direct link to his former years, with tracks such as ‘Deep Six‘ and ‘We Know Where You Fucking Live‘, to name but a few, ‘We Are Chaos‘ is a far more delicate affair. A noticeable slower pace, which, incidentally, does not necessarily mean that this album is not for you, it’s just a deeper, more complicated work of art and should be digested with a little more intimacy, than that of his previous, immediate, floor-stomping releases.

If you’re looking for the now-infamous Antichrist Superstar, you’re not gonna find him here. This is the sound of an artist that is currently evolving as his own pace, without pressure from his peers, with zero fucks given for what the latest trend is.

An apt soundtrack to the current climate of the Western world at present, but not the be-all and end-all of Manson’s artistic transformation by a long shot.

“We are Chaos” is a sturdy stepping stone towards a new chapter, where we can expect to see a more diverse and human approach to the character we have all come to know as Marilyn Manson. 3/5

“We Are Chaos” is out now via Loma Vista Records. You can order a copy from this link, you local record store or access via all popular streaming sites.