Thrash metal titans Overkill are back with a vengeance in Dublin again on their ‘Wings Over Europe’ tour, and bring the heavies with them in the form of German headbangers Destruction and Arizona thrashers Flotsam and Jetsam. 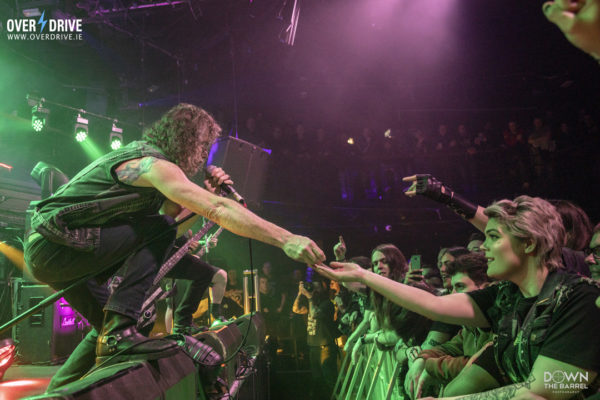 The atmosphere is electric and everyone has turned up early for what promises to be an insane evening of ear-bleeding metal and mayhem.

Flotsam and Jetsam kick things off at about 6.30pm and waste no time in getting the blood pumping. Opening with ‘Prisoner of Time’, and ‘Desecrator’, it doesn’t take very long for the first elements pit action to get underway.

Word in the crowd outside was that F&J were a major draw to this gig, as they are very rarely in Ireland. Singer Eric Knutson can still give the performances that are one of the reasons that they are so highly prized: his energy and focus is quality defined, and his enthusiasm itself is enough to move people.

The floor of the Academy is full so there is not much room to move, and the bodies are slowly and surely starting to get into the mood more and more. It’s a short but awesome setlist from F&J, and I wish they could have played longer than the 40-odd minutes, but there are bigger fish frying backstage, and we’ve only just begun to get worked up. 3.5/5 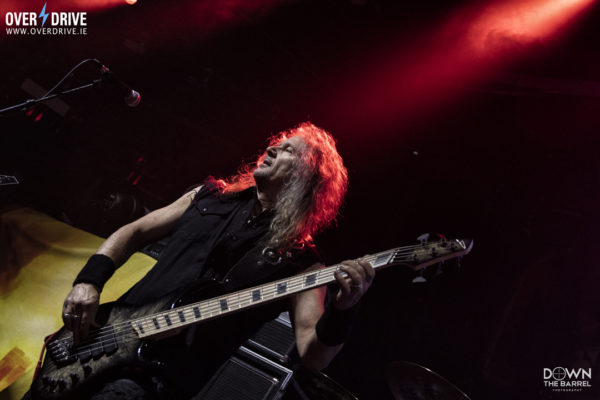 German harbingers of chaos Destruction live up to their name by really turning the screws on Dublin’s fractured skull after Flotsam and Jetsam knocked it out of the park.

Towering imposingly over the crowd, bassist and singer Marcel Shirmer gorges on the already buzzing atmosphere and turns the heat up to 11. ‘Curse of the Gods’, ‘Nailed to the Cross’, ‘The Butcher Strikes Back’ and ‘Bestial Invasion’ all get thrown at us as I watch the madness that has started in the middle of the floor (it’s partly comedic: there’s a guy in the middle of the moshpit trying to drink his beer, and he acts so surprised when he has nothing to drink!). 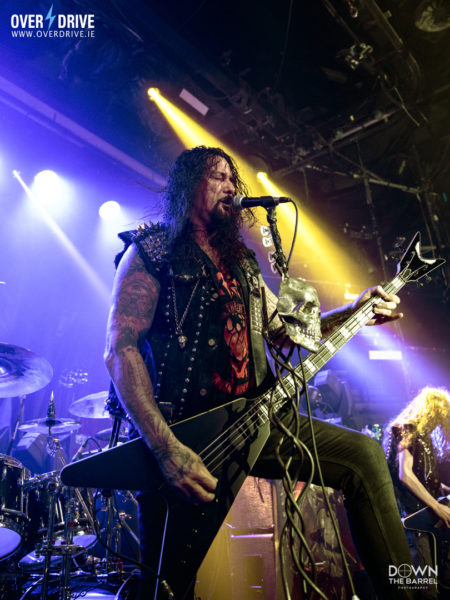 Another savage setlist on a night of pure thrash and still more to come! 4/5

Overkill is one of those bands who found something and never really lost it. No-nonsense, straight talking and apathy for authority are the mainstays of this band’s attitude and it is every bit as relevant in their stage shows today as it was when they started back in 1980.

Drummer Jason Bittner gets the hands moving in the air in time with the bass kicks supported with bass player and co-founding member D.D. Verni has the basslines to get the feet stomping, ready to unleash the full force of the night’s fury.

The band’s pace and ferocity has never waned over all these years, as frontman Bobby ‘Blitz’ Ellsworth sprints onstage seconds before the opening tune ‘Last Man Standing’ off their brand new album ‘Wings of War’ which came out earlier this year. 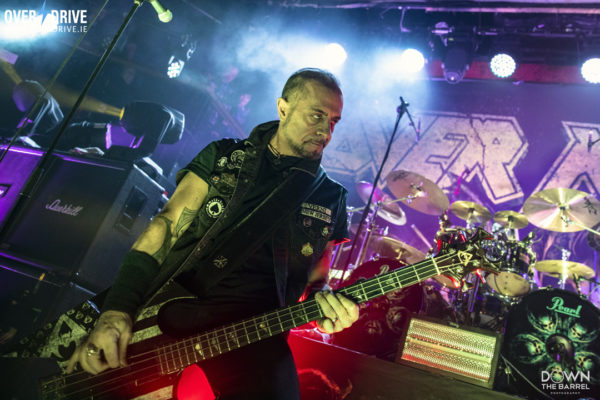 Even though he has been at the helm for nearly 40 years, he still has the energy that he had when he started this gig and has become one of the totems of thrash metal since their inception along with Anthrax, Metallica, Testament, Exodus and other household metal names.

As the setlist roars on with ‘Electric Rattlesnake’, ‘Elimination’, ‘Necroshine’ and a host of top-shelf smashers from their extensive back catalog since 1985, they still manage to throw us another new bone in the shape of ‘Head of a Pin’.

The new stuff is every bit as volatile as the older material, which proves that Overkill still have the goods to deliver many more outrageously heavy tunes (and hopefully more albums). 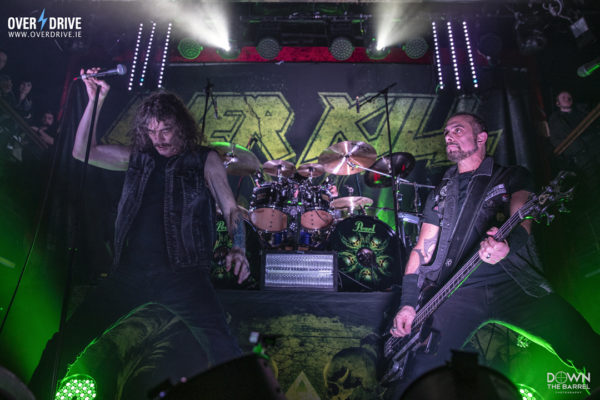 Blitz occasionally stops menacing the crowd to utter a few words of thanks. He makes reference to his grandparents being Irish and that they were watching him from above.

He doesn’t really mince his words (he never really has), and always makes a case for basically acting the maggot as much as possible. Guitarists Dave Linsk and Derek Tailer push the boundaries of shred-speed, as the riffs for ‘Deny the Cross’, ‘Bastard Nation’, and ‘Mean, Green Killing Machine’ keep the pit action going relentlessly and unapologetically.

Blitz as always is defiant as Hell itself, refusing to pause for very long at any point throughout the show (including when someone’s beer goes flying into the air and lands on the band – I expected something to be said, but everyone just looked at each other and shrugged it off). 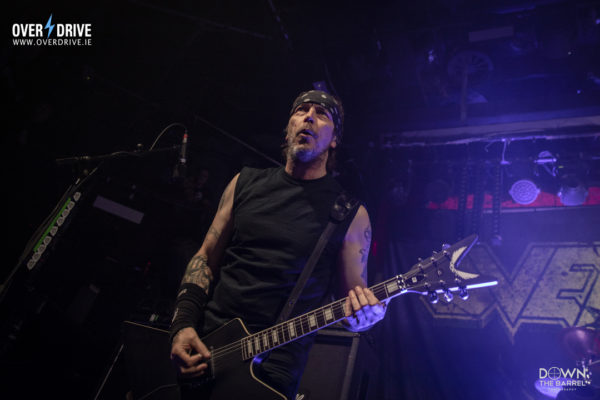 As the night wears on, the merrymakings in the audience intensify because Blitz and co.  are simply stoking the flames to capture as many scalps as possible.

Songs are dedicated to ‘those motherfuckers in the pit!’, and since everyone wants in on that fun, the size grows by about a third in the space of about 30 seconds, so it’s pretty close to a hundred people getting shitmixed.

Eventually, the night has to end at some stage, and we have ‘Rotten to the Core’ to bid us farewell. The band doesn’t get to rest up for very long, because they’re back to kick us a bit further down the road with two encores of ‘Ironbound’ and ‘Fuck You (And Then Some)’. Blitz has 800+ people with their middle fingers in the air, screaming at the top of their lungs and sweat dripping from their faces by the end of it all.

So with ears ringing, we say goodnight and farewell for now, and when Overkill come back on their next tour, we’re just going to do the exact same thing all over again. 4.5/5

Ironbound
Fuck You (And Then Some)

Photo – Down The Barrel Photography, exclusively for www.overdrive.ie © 2019. All Rights Reserved.