Vicar Street holds its first heavy metal show of the new year with Swedish “World-War Metal” heroes Sabaton, supported by German heavy metal legends Accept and power metal fantasists Twilight Force. Sabaton is no stranger to Irish shores, having played here a mere 10 months ago, but even on a Tuesday night, the venue floor is rammed, with the crowd chanting loud and proud. Overdrive sent Shaun Martin to the front lines to send word from the battlefield. 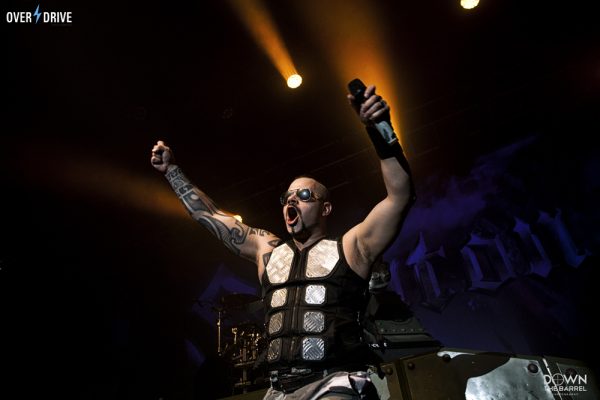 Starting a little earlier than billed, Twilight Force kick into high gear in a power metal frenzy. With songs like Riders of the Dawn, Flight of the Sapphire Dragon, and Power of the Ancient Force, their fantasy-laden set is musically impressive (albeit a bit over the top on the shred). Pixie-eared and faces masked, guitarists Lynd and Aerindir (all band members use fake names to protect their real ones), can kick back and let loose their inner Malmsteen, which is done quite superbly. 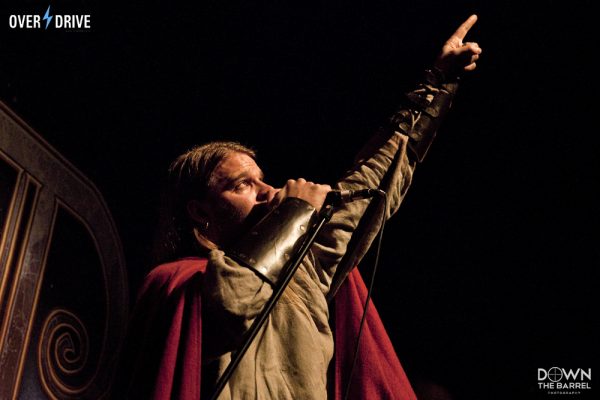 Heavily influenced by fantasy novels and stories, their tales of dragons, mountains and glory get the audience pumped, but it seems that their speedy solos are their only trick other than a powerful voice from vocalist Chrileon and even sometimes he cracks under the strain of the high notes in his vocals. A good start to the night, but Twilight Force might be out of their league compared to their tour colleagues here tonight. 3/5

At the stroke of 8, German heavy metal legends Accept stream onto the packed stage, leaping into ‘Stampede’ as drummer Christopher Williams appears from behind a monstrous drum kit, gong included. The crowd are in seriously high spirits for the entirety of the set list. 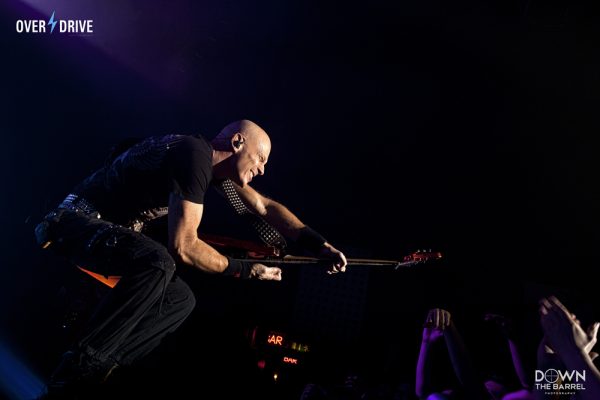 The gargantuan backdrop adorning the stage reminds the punters that the true old-schoolers are on the stage, but are true pros. They let the music do the talking, as crowd interaction is minimal. There is plenty of fist-pumping, head-banging, and foot stomping action from Williams backed up by axemen Wolf Hoffman and Uwe Lulis and the crowd love the intimacy of seeing the action up close and personal. Frontman Mark Tornillo remarks on the length of time it has been since the band were in Ireland and also on the amount of equipment on the stage. 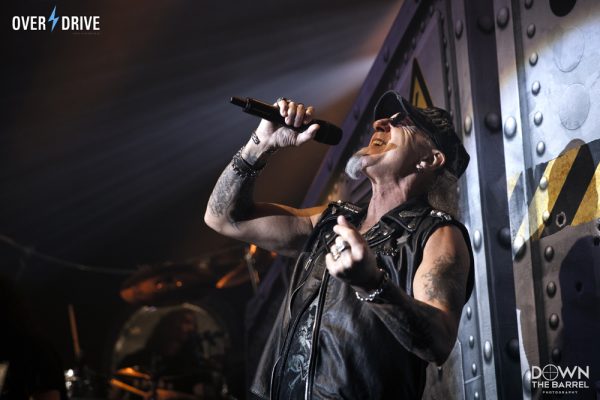 Crowd smashers ‘Fast as a Shark’ and ‘Balls to the Wall’ ignite the audience into a serious frenzy, with the deafening sing-alongs only getting louder and louder. If I were in Sabaton, I’d be thinking how the band can outdo this phenomenal performance, as Accept have headlined some of the biggest stages in metal (Wacken Open Air and Bloodstock to name a few) and show no signs of stopping and growing old gracefully. Top work from the German cohort tonight! 4/5

While waiting for tonight’s headliner it’s impossible to ignore the skyscraper Sabaton backdrop which could easily double up as a small airstrip: it is truly humongous!! 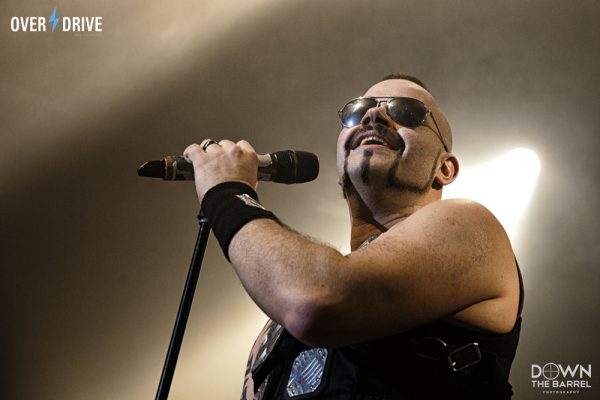 Stagehands earn their wage as they quickly break down the covering set pieces that hid the massive TANK all throughout the supporting bands’ stage time. There is war paraphernalia scattered throughout the stage, with a replica Howitzer atop the tank and customised mic stands in the shape of M-16 assault rifles. Fucking awesome right?

Up until now, the audience had been sparse since Accept ended their outstanding set, but that’s all over. Opening with ‘You’re In The Army Now’, we soon hear Joakim Brodén bellowing over the mic: ‘Hello Ireland! We are Sabaton, and we play heavy fucking metal! 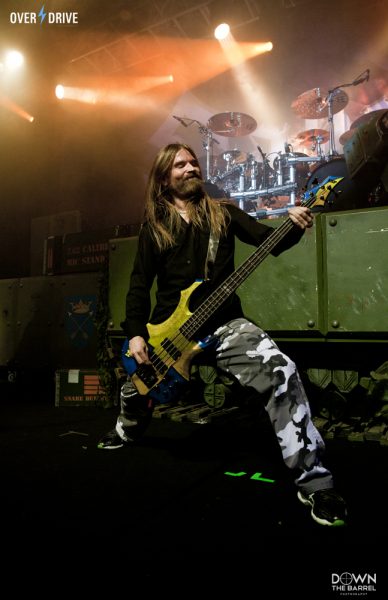 This is Ghost Division!’, Sabaton explode into their night, following their ferocious  opener  with 2 more new songs from their new album “The Last Stand”: ‘Sparta’, based on the Battle of Thermopylae (plenty of ‘HOO! HAH!’s’, and a few movie quotes thrown in for good measure from “300”), and ‘Blood of Bannockburn’, about the Scottish fight for independence from Great Britain. Their new guitarist Tommy Johansson is introduced to the Irish squad, and as a “newbie gift” he gets to pick the next song… which is Swedish Pagans! Truth be told, we may have made up his mind for him!

A few more songs in and Joachim is gifted a Kinder Surprise from the audience and takes time out to have a snack mid-set, as Tommy gets busy putting together a small Kinder princess figurine from ‘Frozen’.  Joachim soon pulls out a keyboard and teases us unmercifully with the intro to Van Halen’s ‘Jump’.

I was a bit annoyed that they didn’t play it as it started perfectly, but then I remembered that they always have a bit of a comedy routine at their gig (I missed them the last time they were here).  Joakim reminisces about his first position 17 years ago in the band as a keyboard player (I’m taking that with a pinch of salt) … however, Tommy is once again the star. Keeping his presence at a formidable pace over keyboard duties, he guides us into a slow version of ‘Final Solution’ supported on acoustic guitar by Chris Rörland. 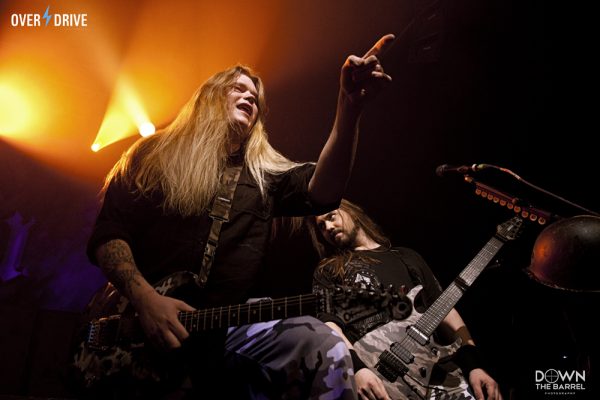 Johansson is markedly a very talented musician and fills the gap left by departed shredder Thobbe Englund, who left the band last year. He is a welcome addition to the fold and fits in with Sabaton’s theatrics quite well. Ever the showmen, they dig out an old back catalogue favourite from the ‘Art of War’ album, “Union” and it goes down a treat. As the night gets shorter, another heavy hitter triple whammy is delivered, with ‘Primo Victoria’, ‘ Shiroyama’ (from The Last Stand) and to finish off, ‘To Hell and Back”.

Another powerhouse performance from Sabaton on Irish shores, and as always, they know they’ll be back, and so will I. 4/5

Photo gallery by Down The Barrel Photography © 2017