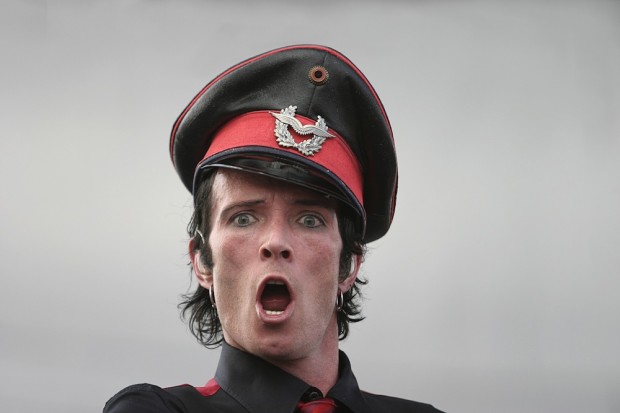 Former Stone Temple Pilots frontman Scott Weiland has finally countered against the band, who dropped a lawsuit on the singer last week for interfering with their career. The vocalist, who has spoken publicly about his distaste for his band’s plans to move forward without him, is now seeking $5 million in compensatory damages against the group.

“How do you expel a man from a band that he started, named, sang lead on every song, wrote the lyrics and was the face of for 20 years and then try to grab the name and goodwill for yourselves?,” asked Weiland in his complaint, before answering his own question with, “You don’t, but three of the instrumentalists in Stone Temple Pilots tried.”

The band recently utilized their signed agreement and clauses to demonstrate why they booted Weiland from the group and how he’s violated band policy. Likewise, Weiland is also pointing to the contract and stating that there is a clause that allows each of the band members to perform on their own. He adds that the agreement also states that by kicking him out, they too would have to perform under a different name if he were not involved.

While both sides maintain a communication breakdown, they differ on who was at fault. In Weiland’s suit he claims to have reached out to the band multiple times, but he says that his attempts were ignored.

According to Rolling Stone, Weiland is seeking compensatory damages of more than $5 million, along with statutory damages of up to $2 million for each “willful use” of the Stone Temple Pilots name “per mark, per type of goods or services sold, offered for sale or distributed.”

The group had previously stated in their legal action that Weiland sought to stop the release of their single and performances with Chester Bennington, which is what led to their lawsuit. Now Weiland is stating that each time they do play or release material, they are infringing upon his rights.

Following the split, Weiland has been touring the country as a solo act with his band The Wildabouts, but has been performing songs from the STP catalog.