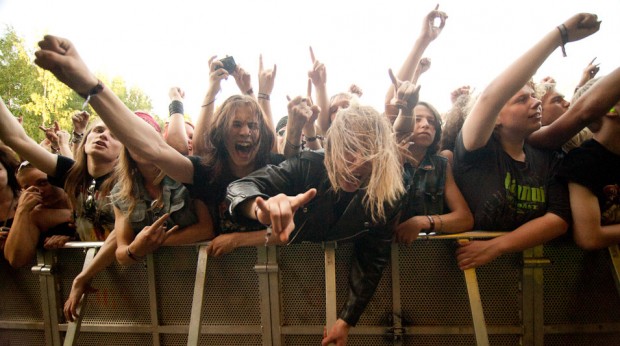 With the summer of 2013 coming up on the horizon, Overdrive have decided to have a look at what options you lucky people have when it comes to face melting festivals for 2013!!! 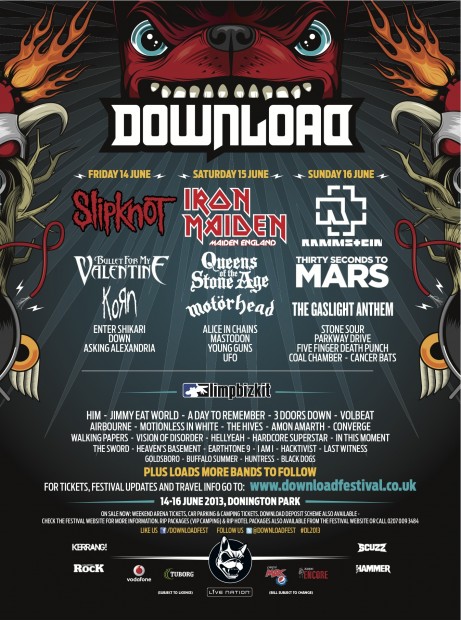 First off, we have the mighty Download Festival that promises to top last years epic line up. The Friday night main stage belongs to Slipknot who will be taking no prisoners, with their brutal, tornado of energy and pyro live show. Saturday see’s the worlds finest Heavy Metal band Iron Maiden running through a list of classics that will no doubt have grown men weeping with joy. This will be the first time the band will be playing the “Maiden England” tour which they rolled across Northern America during the summer of 2012. Not content with the Friday and Saturday headliners, well you can get your nuts roasted by the kings of spectacular live performance. We can only mean Rammstein! This will be the fist time the German industrialists will be gracing the holy ground of Donnington and I’m sure they have already begun packing the explosives into the trucks for the amazing stage show that will no doubt be one to remember.

The Download line up also includes Queens of the Stone Age, Motorhead, Mastodon, Alice in Chains, Cancer Bats, Korn, Stone Sour, Limp Bizket, Vision of Disorder, Down and many many more as well as more bands to be announced. If you have not got yourself a ticket for this, get your shit together now and sort it out!!! Get all your Download information here – Download Festival 2013

Not only do you have the pleasure of checking out Download Festival 2013, but there is also Bloodstock Open Air Festival, that has got a line up that is literally dripping with the saliva of the Devil himself! This festival has become one of the most important events on the Metal/Extreme calender for any self respected lover of all things heavy! This years line up is already staggering and will no doubt be considered as one of the most purest unadulterated balls out, fucking METAL line up’s this side of Hell!

With a capacity of approximately 10,000, this is the ultimate festival to attend. Featured main stage acts across the weekend are as follows. King Diamond, Accept, Municipal Waste, Dark Funeral, Firewind and Ex Deo. Not content with that!! Well Saturday see’s the always awesome live, Lamb of God, Avantisia, Kataklysm, Hell and Belphegor who will be lining things up nicely for Sunday, that will see Slayer, Anthrax, Devildriver, Amorphris, Fozzy and Whitechapel. There is a tone more bands to be announced for Bloodstock and tickets are on sale now, but are selling super fast, so if your planning to go but have not secured yours, Overdrive advises you to sort that out yesterday!!!! For more info and tickets please go here now!!! Bloodstock

This years Hellfest in France is shaping up to be a killer show with current line up featuring Kiss, ZZ Top, Twisted Sister, Saxon, Down, Testament, Kreator, Immortal, At The Gates, Volbeat, Clutch, Red Fang, Black Spiders and Primordial to name but a few. For more information on Hellfest just hit up this link. HELLFEST 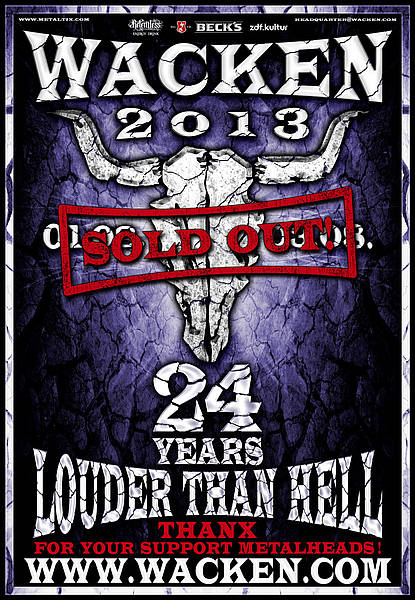 This year’s Wacken Open Air Festival has already sold out! The German open air festival has been hammering out the best of the best for 24 years and does not look like it’s going to stop anytime soon. This years event has a vast amount of bands of which include Rammstein, Anthrax, Henry Rollins, Alice Cooper, Deep Purple, Devildriver, Ugly Kid Joe, Nightwish, Motorhead, Trivium, Ihsahn and Lamb of God plus loads more! If you have not got a ticket for this already then hard luck! There’s always next year. For more information on Wacken Open Air hit this link – W.O.A