The recent abuse allegations against Marilyn Manson have been coming not only from Evan Rachel Wood but many more are beginning to surface. Find out more below…

Wolf Alice frontwoman Ellie Roswell has added her voice to the growing list of musicians to have come forward against Marilyn Manson in the wake of the various allegations of abuse made against him earlier this week.

If you’re just catching up, this past Monday, February 7th, saw several women come forward with allegations against Manson that ranged from sexual assault and torture to grooming, emotional abuse and more.

Manson‘s own ex-fiancée Evan Rachel Wood was among those to publicly call him out, with that initial collection of allegations made against him available to read in full at this location. Manson himself was quick to deny the allegations levelled against him, insisting they were “horrible distortions of reality.”

His dismissal did little to stem the ensuing backlash, however, as several musicians and peers of Manson would come forward against Manson in the days that followed, sharing their own tales of disturbing situations they had experienced with him.

Several other people from Manson‘s past, including former partners and personnel, would also come forward to voice their support for the alleged victims as well.

Speaking via Twitter over the weekend, Roswell added her own experience with Manson to those allegations, claiming that she caught him filming up her skirt at a festival several years ago. She said of that: 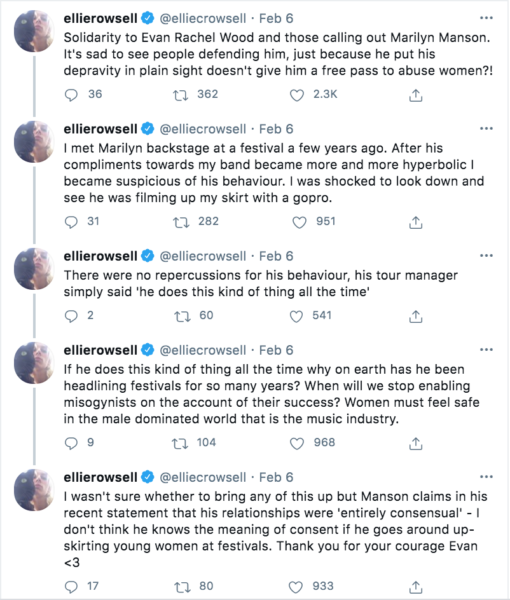 In other news, in addition to recently claiming that Manson frequently used anti-Semitic and racial slurs during their relationship, Wood also claimed on her Instagram Stories this weekend that she filed a police report on December 19th of last year against Manson‘s current wife, Lindsay Usich.

She said in part of that:

“On Dec. 19, I had to file a police report after I was alerted to threats made by @leslee_lane and @lindsayusichofficial (Brian’s wife) for conspiring to release photos of me when I was UNDERAGE”

Wood backed up her claims with a screenshot of the police report with select identifying information blacked out. She alleged in the post that the threats were made to “shut her up” and “ruin her career” should she apparently pursue her allegations against Manson.

Since the allegations were made public, Manson has been dropped by his management, his record label, his talent agency and also lost several film/TV roles.

More to come on this unfolding story…