ALL TIME LOW are will be headlining their biggest show to date at Dublin’s 3Arena on 16 February 2016 as part of their ‘Back To The Future Hearts’ tour and Overdrive has a pair of tickets to give away to one lucky person! Get all the details below. 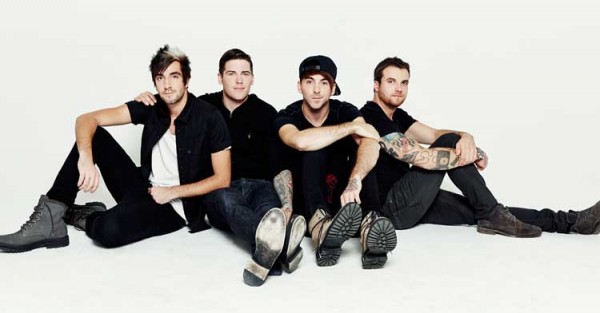 This is the band’s biggest Irish headline show to date.

Tickets priced €37 inclusive of booking fee go on sale at 9am Friday, 4 September from Ticketmaster outlets and www.ticketmaster.ie

Under 16’s must be accompanied by a parent or guardian.

The Baltimore quartet scored a UK Number 1 album with current release, ‘Future Hearts’, in April this year and cannot wait for their first tour since its release, as frontman Alex Gaskarth states: “Playing the arena circuit earlier this year with the You Me At Six boys showed us that rock’s still got a place at the table when it comes to putting on massive shows. We feel like it’s our time to step up and prove to ourselves and the world that since ‘Future Hearts’, All Time Low is an arena band. We can’t wait to bring a ton of the new music to a show on this scale. It’s going to be epic!!”

The band recently performed on the main stages at the Reading and Leeds festivals in August, see video below.

MORE ON ALL TIME LOW: They’ve repeatedly topped the charts, sold over 1.3 million albums worldwide, raked in 100+ million views on YouTube, toured with the biggest names in music, and have taken over airwaves around the globe… All Time Low is a bona fide worldwide sensation and they’re kicking off a whole new chapter in 2015.

Since bursting onto the scene in 2003, All Time Low has released six studio albums, toured with bands such as Blink 182, Green Day, Fall Out Boy and Foo Fighters, played major festivals around the world, including Reading/Leeds in the UK, Soundwave in Australia, Summersonic in Japan, and the legendary Vans Warped Tour in the U.S. The band has also won numerous awards throughout their career, including Kerrang! Awards for ‘Best International Band’ in both 2013 and 2015.

Future Hearts was produced by John Feldman, who has produced and co-written numerous hits for the likes of Good Charlotte, The Used, and Australian boy band sensation, 5 Seconds of Summer. All Time Low band member, Alex, has also written hit tracks for 5 Seconds of Summer and English pop-rock group McBusted. Future Hearts features exciting new collaborations on tracks such as ‘Tidal Waves’ featuring Blink 182’s Mark Hoppus and ‘Bail Me Out’ featuring Joel Madden, who also co-wrote the track.

FOR YOUR CHANCE TO WIN TICKETS, JUST ‘LIKE’ OUR OVERDRIVE FACEBOOK PAGE AND SHARE ON YOUR TIMELINE PUBLICLY. DON’T FORGET TO TAG ‘OVERDRIVE’ IN THE COMMENTS! GOOD LUCK! 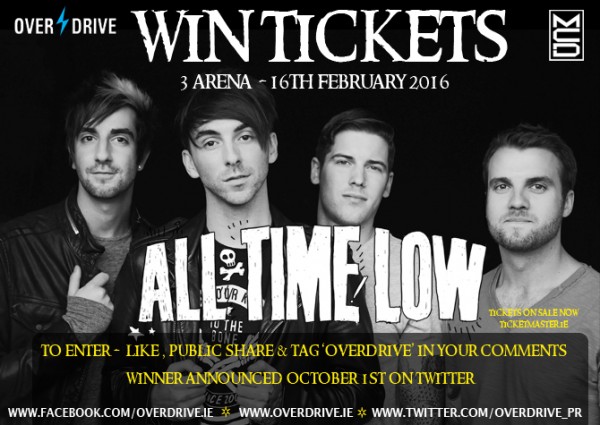