US metal beasts TRIVIUM are pleased to confirm SikTh and Shvpes as special guests on their UK & Europe Tour. They perform at Dublin’s Academy on 11th February and Belfast, Limelight on Sunday 12th February 2017. Tickets available now from Ticketmaster.

SikTh is considered as one of the pioneers of the “Djent” genre and have been away from Ireland for far too long. This will be the band’s first show back in the Irish capital since their much talked about Voodoo Lounge performance back in 2006. Check out the video below of the band’s new material.

Joining Trivium and SikTH will be Shvpes who will be playing cuts from their debut album Pain Joy Ecstasy Dispair which was released earlier this year. The Birmingham four-piece will be bringing their crushing metal anthems to Ireland for their debut performance. Do not miss out!

Having released their Silence in the Snow studio album last year, the Floridian based crew will be finally airing their setlist of new material with this UK / Ireland tour in March of 2017. The band’s headlining slot at last year’s Bloodstock Festival saw them reach new levels of success and will no doubt be on fire for the forthcoming tour.

Watch’s Trivium latest video for song ‘Dead And Gone’ from their classic metal, latest album ‘Silence In The Snow‘ below: 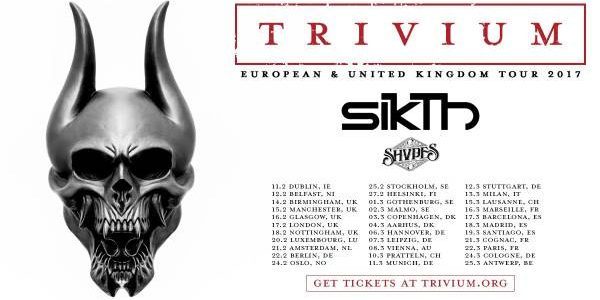