WILLIE & THE BANDITS RETURN TO IRELAND FOR EXCLUSIVE DUBLIN SHOW IN FIBBERS!


Opening for DEEP PURPLE on their arena shows back in 2013, being compared to the likes of Cream and The Jimi Hendrix Experience and conquering Glastonbury Festival, is something that few bands get to witness in their lifetimes, but UK blues rockers, but for WILLIE AND THE BANDITS it’s just another day in their touring schedule! Their return to Dublin on November 5th is highly recommended. Get the details below. 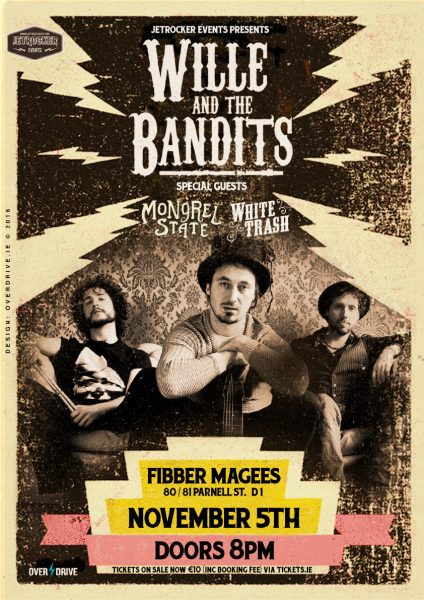 Jetrocker Events will be playing host to WILLIE & THE BANDITS on November 5th in Dublin’s Fibber Magees for the final date of their Irish tour. The UK three-piece have notched up some notable achievements such as being hand-picked to open for DEEP PURPLE’s arena tour in 2013 and have toured extensively throughout Europe and the UK.

With their fresh approach to blues rock music, Wille and the Bandits have been assertively carving a place for themselves in Europe’s music scene, developing a reputation as one of the best live acts around and capturing the imagination and interest of music lovers right across the globe.

The band was listed in the top ten must see bands at Glastonbury 2014 by BBC Radio 1 and be personally invited to perform on the German TV show Rockpalast; a musical institution of global import (see footage below).

Tickets are on sale now for Willie and the Bandits in Dublin’s Fibber Magees, November 5th with support from Mongrel Stage and White Trash. Check out Jetrocker Events for tickets and more information, on this link or click the graphic below.