Always a duo to challenge the mainstream, RUBBER BANDITS will be taking to the stage in Dublin’s Academy for their first live headline performance in 2017 tomorrow night (Sat, Feb 4th). Find out more below. 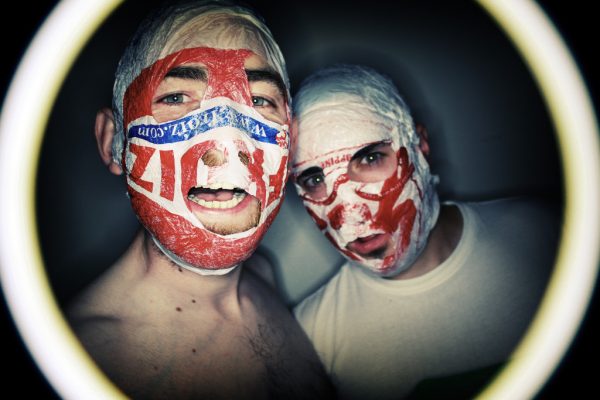 With a cameo in the new Trainspotting 2 movie, due for release on January 27th, the Limerick duo was also selected for the movie’s official soundtrack with their ‘Dad’s Best Friend’ track featuring alongside the likes of Blondie, Queen, Frankie Goes to Hollywood and Young Fathers. You can access the official video for Dad’s Best Friend below;

RUBBERBANDITS are an award winning theatre act who use a mixture of music, performance, video and social media to deliver ideas into people’s heads using their socially engaged artistic form known as “Gas Cuntism” [sic].

Distinctive for their plastic bag masks they always wear, musical duo Blindboy Boat Club and Mr Chrome started their career at the turn of the new millennium as prank phone callers in their native Limerick and moved into comedy hip-hop a few years later. 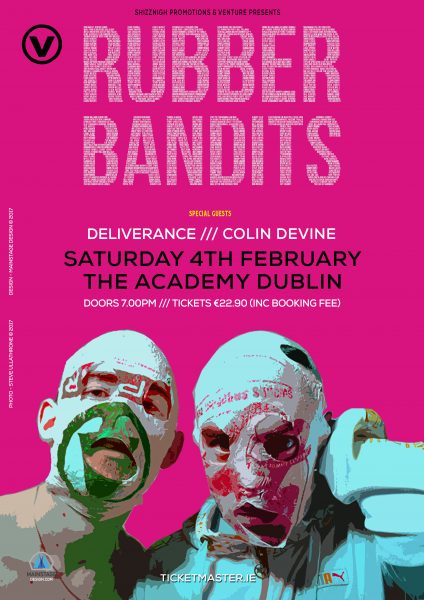 In October 2010 they began a weekly slot on RTE 2’s Republic of Telly – and released their debut single ‘Horse Outside’, which became a viral internet hit (more than 14.5 million Youtube views) and then a genuine chart success. The following year C4 commissioned them for a series of Comedy Blaps – online shorts – and they were named Best Irish Act at the entertainment.ie awards. The RUBBERBANDITS also won best music and variety act at the 2012 Chortle Awards and recently signed to MTV USA.

Tickets for RUBBERBANDITS in The Academy Dublin, are on sale now via all Ticketmaster outlets nationwide and also online for €22.90 (inc booking fee) Official link for the event can be found here. For more information, please contact Venture Presents on this link.