Having been locked in the studio for the last year or so, Words That Burn are back with an album that is loaded with a potent cocktail of soaring melodies, brutal heaviness and brain-hacking choruses, that are designed to dominate.

New single ‘ARISE’ has all the bells and whistles to prove that this could be the album that catches the attention of a global metal audience.

With the band’s debut “Regret is for the Dead‘ now 3 years old, the Dundalk four-piece returns with their new sophomore album which is due for release in the coming months and sees a change in sound that’s evident from the preview single ‘Arise‘ which you can hear NOW via the stream below.

We spoke to the band’s vocalist Roni MacRuairi about the new single and the forthcoming new album.

OD – ‘ARISE’ is the first single of the new album, would this be a good representation of what we can expect for the rest of the LP?

RONI – Individually, the songs have their own personality and tell their own story but we think ARISE absolutely encapsulates the overall energy of the album. This record is much more of a sonic roller coaster than anything we have done before. It’s more fragile in some places but it’s more aggressive & ferocious too.

OD – What is ‘Arise’ about and what was the inspiration for the arrangement and finished sound on the single?

RONI – ARISE is about letting shit go. It’s a song about mental health and trying to get on top of things.

The verses are kinda the equivalent of what it feels like to scream into a pillow because you don’t want anyone to hear you, even though you desperately want them to. This is a hot topic subject right now which is great –  it should be until it’s addressed on every platform so people out there that just want to scream, know that they don’t need the pillow and that is OK to talk or shout about whatever is fucking with them.

The song itself has a very positive vibe to it. Which when it comes to this kind of subject matter, positivity is hugely important. 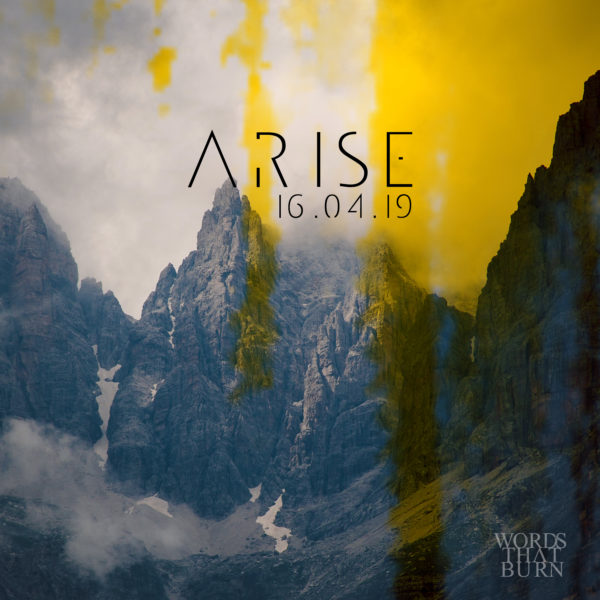 OD – We’re assuming you have a title for the album, can you share that with us?

RONI – The album will be called “PYRES”- which based on the content and attitude of the record, we think creates a pretty fitting backdrop to the lyrical content in the stories.

There is a fixation with death throughout this record, however, it’s not coming for a morbid place. From the most part, it is celebrating death in the sense that it can bring about change. Killing off the parts of you, like fear and doubt and self-hate can potentially leave spaces for your own physical and mental evolution.

OD – There’s no doubt that there is a change in the band’s sound on this new track, can you talk a little about the direction with writing and how this came about?

RONI – We said to ourselves about a year or so ago that it was time to go big or go home so that was the mantra for the whole writing process. What that meant basically was that we wanted to try things that we weren’t confident enough to do on previous records.

We looked at our favourite artists and said if they try these things or say these things that what is stopping us?? We know that we are a tiny fish in a huge ocean, but if what we do or say connects with one or ten or a hundred people and they get something from it, it’s worth going the extra mile for.

Sound wise, we wanted to put more energy into the new songs. The process was different than the last few releases. Shane (Martin – Guitars & Vocals) essentially took the reins on writing the music so this time everything was coming from the same place.

Then we took the music to the band room and jammed the songs out and tweaked if necessary. Then I wrote the lyrics around that or we tweaked again to suit certain vocal patterns and melodies.

OD – It’s been 3 years since ‘Regret is For The Dead’ do you find that a lot has changed for you as a band or do you find that the Words That Burn blueprint is still the same, only stronger?

RONI – We’ve done a lot since the release of RIFTD. We got off our asses and got out there. We’ve been around Europe three times and played some killer festivals and club shows.

You learn so much about yourselves as a band when you tour, especially with other bands. Stuff that you can take (or not take) onboard that works (or doesn’t). One thing we have definitely learned though is to work with the right people. It’s massively important. We’ve always had a pretty focused and strong work ethic – that blueprint remains the same – but having the right people in your corner definitely makes that stronger.

OD – Will there be any other singles coming off this album in the near future?

RONI – There will indeed. We’ll be shooting a music video for the next single in the coming weeks.

OD – When can we expect a release date?

RONI – We’re not 100% sure on an exact release date for the album but somewhere between the end of May and mid-June all going well. Which will just be in time for our summer shows!

OD – You’re playing a few shows already this year with the announcement of Knockanstockan Festival and also opening for Alien Weaponry, can we expect a lot of new material at these shows?

RONI – I think bar one song, the sets are going to be all new material. The slots we have are going to be action packed full of riffs and a whole pile of energy. This new record has given us what feels like turbo boost injection so we can’t wait to showcase the new material onstage.

OD – For anyone that’s never heard the band before, what would you say best describes Words That Burn?

RONI – We’re the ‘lil guys from the sticks looking to make a big fucking noise for people to blow off some steam to, bang their heads to, scream their lungs off to…. and maybe even dance a little.